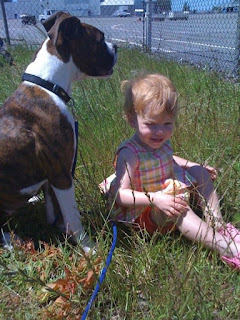 Boxers are one of the most recommended breeds for families with children. But you must follow some basic, common sense guidelines.

Children should be taught how to behave around dogs, even if their own family does not own a dog.
For example,

a child should never approach a strange dog without asking the owner if it's OK to pat the dog. If the child sees a loose dog on the street, he should not approach it even if he knows the dog belongs to his friend.

Nor should he scream or run away. A running being frequently says "prey" to the dog and triggers the chase response in his brain.

Most dogs, even those that are well-trained, do not consider children as figures of authority. Furthermore, since children frequently stare intently at animals, a dog may feel threatened by this short person who is trying to catch him. Even the best-natured dog may bite to protect himself in these circumstances, especially if he feels cornered.

Once a child is given permission to approach a dog, she should present her closed fist for the dog to sniff. This protects the fingers in case the dog is frightened and tries to nip.
Children should never hug a dog that is not their own, and should only hug their own dog very gently if the dog can tolerate the hug. Children should be taught to never hit dogs with their hands or an object, to lower their voices when playing with the dog, to leave the dog alone when he's sleeping, eating, or ill, and to never tease a dog in any fashion.

1. The dog should never be left alone with a child less than five years of age. A young child may
challenge or injure the dog unintentionally and the result could be tragic. Dogs and children should be
separated at snack time so the dog doesn't learn to steal food from tiny hands.

2. The dog should have a place he can call his own, a retreat, a private room, a den. This can be a
special room or crate in the house. The children should never be allowed to bother the dog when he
is in his private place.

3. If the dog has access to a fenced yard, owners should make sure that neighborhood children
cannot accidentally or intentionally tease him. Kids often begin by goading the dog to bark, then
to snarl. Or they may throw things at him to chase him away from the fence. However it begins, the
end result is usually the same: the kids learn that teasing the dog gives them a feeling of power
tinged with the possibility of danger and the dog learns to hate kids. This hatred may be manifest as
fear or as aggression, and it rarely ends well.

4. Provide a crate where the dog can escape the attention of boisterous or over-zealous children.

5. Teach children to leave Doggie alone when he's in the crate, to pat him gently--no squeezing
around the neck, please--and to leave him alone while he's eating.

6. Do not play tug-of-war with any dog who has access to children. A dog that learns to tug on any
item will soon figure that anything he can grab is his, even if it's a child's toy, clothing, or appendage.

7. Teach children not to run past the dog and scream, for this can excite the dog and lead to
dominant and even aggressive behavior.

The sight of a child and a dog napping together on the sofa or the floor, playing in the yard, or contemplating the sunset is a wondrous thing. The potential relationship between a child and the dog who considers himself the family guardian is precious, and it needs to be nurtured and guided.

Families can accomplish this by teaching the dog and the child to respect and cherish each other.
By Jennifer Kaiser - May 21, 2018

Email ThisBlogThis!Share to TwitterShare to FacebookShare to Pinterest
Labels: Training 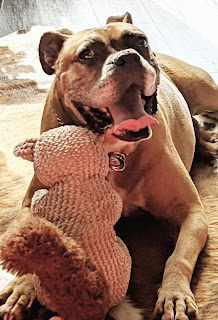