Our volunteers are all set and are off to BRLA from Mar. 9 to 11th. They will be bringing 6 boxers home with them but at this time we do not have 6 families waiting. So if you have been thinking about adopting and the time is right please send us your application so we can add your family to the boxer babies who are coming to Canada on the 11th of March!
By WBBR - February 15, 2008 No comments:

Our Next LA Trip has Been Scheduled

We are very excited to be starting down a new road with adoptions. We have two volunteers, Jennifer and Sheri who will be a part of the first volunteer run to LA to bring home waiting boxers. They will be travelling down Mar. 9-11th and bringing home 6 boxers to already pre-selected families.

If this trip goes well then we will be organizing another trip as soon as we have enough waiting families to send another volunteer down!

Yahoo, this is very exciting! It's a new step for our volunteers and our adoptions!
By WBBR - February 10, 2008 No comments: 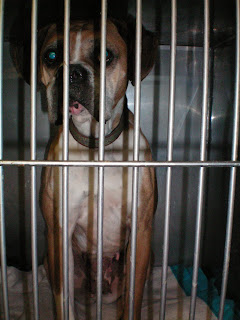 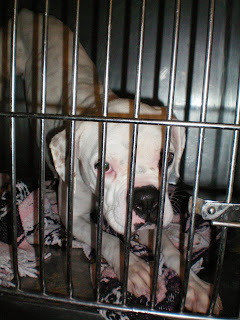 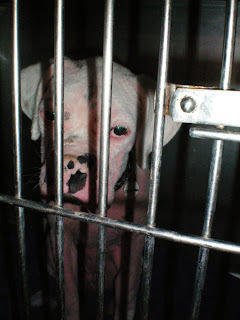 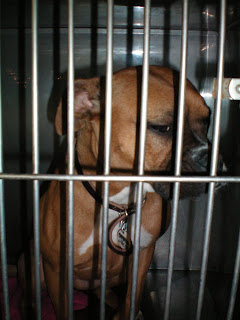 My Trip To LA 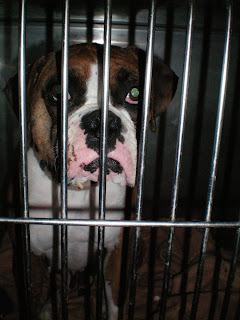 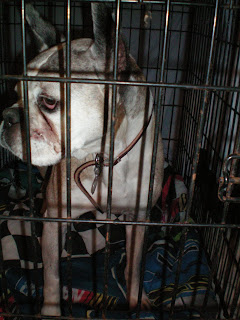 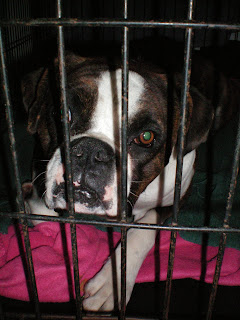 I've been back a full week now and it's seems like a lifetime ago I was at the LA shelter. It was a whirl wind trip and one that I wish could have lasted longer.
My flight out on the 27th couldn't have been any better. I was suppose to fly via Seattle but when I arrived in Vancouver they told me there was a direct flight that left sooner! I was more then happy to move to that flight. I arrived at the shelter a little before 8pm and didn't think I was going to be doing much as it was late and was just waiting to follow Ursula home for the night. Again the sounds, the smell all hit me like a brick wall. Walking through those shelter gates is like going no where you have ever been before. After about half an hour of walking around I quickly realized we were going no where any time soon so I changed my shoes and got to work. After washing 70 or so dog dishes and folding two heaping port-a-cribs full of laundry it was close to midnight and time to hit the sack.

Monday morning I got up and headed out to the shelter. I started walking and working with the dogs at the main shelter. I visited the rehab shelter which is looking fabulous! It's still a work in progress but night and day from where it has been. I had the chance to visit with several of the volunteers and work with some of the rehab dogs. Back to Fleetwood (the main kennel) to do some of the chores I had been asked to do, some of the dogs needed medication, others needed wounds cleaned and medicated, check on the dogs who had surgery on the weekend, move some dogs, and of course make sure the washer and dryer doesn't stop! Dinner time rolled around faster then I could have imagined and back I went tired and my back was a bit sore.

Tuesday morning I was up and headed out to the shelter. Another day of walking the dogs and working with them. Medicating, cleaning, moving some dogs and preparing kennels for new dogs arriving. I worked some more with the rehab volunteers who work so hard with the "underdogs", it so nice to see so much dedication to these far from perfect boxers. Back to Fleetwood again to clean the sores and wounds of one boxer, make sure the old lady had her eye oinment and was wearing her cone, give extra special hugs to my favourites, do some more laundry and then I was alone. It was dark out, the shelter was quiet and the dogs were all settling in for the night. I walked the front kennels, I walked the inside kennels, I walked the back kennels and then stopped in the house to check on the old couple. I sat down and talked to the old lady and her companion and I broke down and cried.

How the volunteers can be there weekend after weekend, dog after dog is beyond me. There's just no end. In the time I was there the phone rang off the hook with people wanting to surrender their dogs, shelters bursting at the seams wanting rescue to pick up a boxer, boxer so emaciated, unloved and uncared for.

I pulled myself back together as I still had to head out to Walmart and pick up crates for the return flight. Stopped at the first WalMart, all sold out. The next one, all sold out, ugh! So I then hit the road and did a drive which is the equivalent of driving from Vancouver to Abbotsford and found crates at the last Walmart I visited.

Wednesday was a whirlwind. First I went to the vet and picked up LoLA who was in getting her rabies and being spayed for her trip back to Vancouver. Then off across town to pick up the pups from their foster mom. From there to the office to make sure I had all my paperwork in order and then back to Ursula's for a fabulous lunch! After lunch it was time to head to the airport. I returned the rental car where Rainha's mom met me and drove me and the rest of the gang to the airport. Nothing's cuter then boxers in crates so we got lots of attention at the airport and before I knew it we were all checked in and we were on the plane and flying home.

In Vancouver I had some wonderful people who helped me out with the 3 large crates and my luggage. A very nice gentlemen who owned a boxer himself helped me out with the crates until we meet Rainha's new mom! Rainha headed back to a hotel with her mom before heading home to the island on Thrusday. The pups and LoLA all came home with me to prepare for their new homes.
By WBBR - February 06, 2008 No comments:

Where is the Adoption Application

Our Adoption Applications are currently closed, while our volunteers get caught up. If you are looking to adopt please visit your local shelter. Thank you for adopting.