Demodex Mite under the Microscope 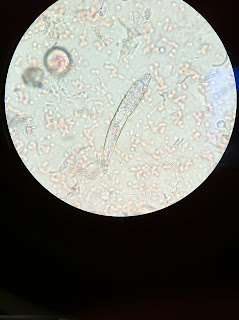 Mange is a parasitic skin disease caused by microscopic mites.

Demodectic mange, sometimes just called "demodex" or "red mange", is the most common form of mange in dogs. It is caused by the Demodex canis, a parasite that lives in the hair follicles of dogs. Under the microscope, this mite is shaped like a cigar with eight legs.

"As long as the body's immune system is functioning properly, these mites cause no harm. "

All normal dogs (and many humans) have a few of these mites on their skin. As long as the body's immune system is functioning properly, these mites cause no harm.

Demodectic mange most often occurs when a dog has an immature immune system, allowing the number of skin mites to increase rapidly. As a result, this disease occurs primarily in dogs less than twelve to eighteen months of age. As the dog matures, its immune system also matures.

"Demodectic mange is not contagious to other animals or humans."

What does demodectic mange do to the dog?

Email ThisBlogThis!Share to TwitterShare to FacebookShare to Pinterest
Labels: Dexter

We're putting out a call for foster homes. Being a foster is very special and rewarding. And takes a very strong heart. Your home is the... 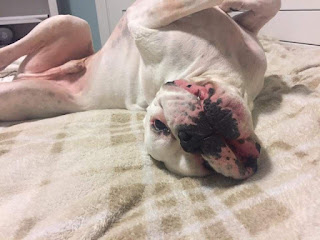