How to Properly Introduce Dogs to Cats 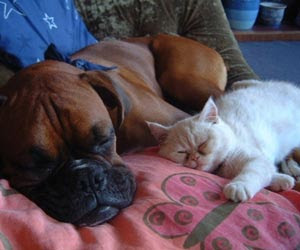 Dogs and Cats in Harmony

Most dogs can be taught to tolerate cats if their owners are willing to be patient and consistent. Some dogs take longer to train than others and the difference is usually due to the dog's level of "prey drive".
Nature designed canines to be predators — to chase and catch smaller animals for food. Although dogs have been domesticated for thousands of years, they still act upon the instincts nature gave them. Through generations of selective breeding, people have
modified these instincts. By decreasing the effects of some and enhancing the effects of others, we've been able to develop a wide variety of different breeds of dogs, each meantto serve a different purpose or perform a certain function.
There are several effective ways to train a dog with a high prey drive to live peacefully with cats or other small pets. I prefer to teach these dogs that cats are off limits altogether and are not to be disturbed. Using a friend or family member to help you, set up several short daily training sessions.
1. With the dog wearing a training collar and leash, put him on a sit/stay beside you. Have your friend hold the cat on the other side of the room. Your dog will
probably be very curious and even excited at seeing the cat, but insist that he
remain in the sit/stay position. Praise your dog for sitting calmly.
2. Have your friend bring the cat a few steps closer. If your dog continues to stay
quietly at your side, wonderful! Praise him for it. If he tries to lunge at the cat,
though, give him a stern, fierce-sounding “NO! LEAVE IT!” along with a short,
sharp jerk on the lead and put him back in the sit-stay position. As soon as he is
sitting calmly again, praise him sincerely. Continue bringing the cat closer, a few
feet at a time, repeating the corrections as needed and making sure to praise the
dog when he sits quietly and ignores the cat. Have patience — depending on the
intensity of your dog, you might only be able to gain a few feet each session.
3. When your dog is able to sit calmly even when the cat is right next to him, you're
ready to proceed to the next step. Release the dog from his sit/stay and let him
walk around the room with the cat present. Leave his lead on so you can easily
catch him and give the necessary correction if he gives any sign of wanting to
chase the cat. Your supervision at this point is critical - to be effective, you must
be able to correct the dog each and every time he even thinks about going after the
cat. If he's allowed to chase he r, even once, he'll want to try it again and you'll
have to start your training over from the beginning.
Some dogs learn quickly, others may take weeks to become trustworthy around cats.
Until you're sure the dog will remember his training, don't leave the m together
unsupervised!
You can also combine a dog crate/cat crate with the “LEAVE IT!”
command to help introduce cats and dogs. Sometimes the dog is crated
with the cat free in the room, at other times, the cat is crated while the dog
was free. The dog should be allowed to investigate the cat but not to
harass or bark at it.
By giving the dog extra attention and even special treats when the is in the
room, the dog soon learns that having the cat around means very good
things are going to happen to him!

1. NEVER ALLOW YOUR DOG TO APPROACH YOUR CAT. You may think
that your dog just wants to be friends, but your cat will allow just so much sniffing before she decides to high tail it out of there, and with Fido right on her feline heels. Dogs like to chase small creatures, that is part of their hunting instincts, so it is not that your dog is being bad, he is following his instincts and besides, he may just find it plain old fun. Keep your dog in a down/stay position whenever your cat is in the room. That way Fido is under control while Fluffy can gain some confidence around him. If you do not have verbal control over your dog, meaning you can stop Fido dead in his tracks when you tell him NO or OFF, then keep him on a leash in the house until you can learn to verbally control him. Just let your dog drag a six to ten foot leash around the house behind him so you can stop him easily. You can also use a squirt bottle set on a straight stream (bullet)to douse Fido in the face should he try to get on the case of Fluff. Praise your dog as soon as he stops chasing your cat. If you cannot get a handle on Fido's behavior, a good quality training class can put you back in control of Fido so Fluffy can enjoy her home too!
Do not allow your dog to chase ANY small animals, that will only undermine training Fido to leave your cat alone.
2. ALLOW YOUR CAT TO APPROACH YOUR DOG. By all means, allow Fluffy to walk
up and investigate your dog but watch carefully so Fido does not attempt to chase your cat. By allowing this to happen, your cat will gain trust in you and your dog, that nothing bad is going to happen to her. Fluffy will begin to realize that sharing a house with a dog (who is not allowed to approach her) isn't so bad at all!
3. ALLOW YOUR CAT TO HIDE IF SHE WANTS TO. Do not force a meeting between
the two. Allow Fluffy to investigate Fido on her own time, you just make sure Fido is not allowed to chase her at ANY time. Give her a quiet room to escape to with her food, out
of reach of Fido as well. It may take as long as eight to ten weeks before your cat will adjust to sharing her home with a canine pal.
4. KEEP FIDO and FLUFFY SEPARATED WHEN YOU ARE NOT HOME. Until you feel
that Fido is not going to terrorize your cat at any time, then do not leave them alone. Either put your cat in a room with the door closed (make sure your cat has her litterbox in there as well as some toys and water) or put your dog into confinement (such as a crate placed in your house).
5. REWARD ANY POSITIVE INTERACTION BETWEEN THE TWO. Every time Fido lets
Fluffy approach him or lets Fluffy walk by him without chasing her, PRAISE, PRAISE,
PRAISE such as saying in a happy voice “GOOODDD DOGGG! WHAT A GOOOOD
BOY YOU ARE!”
6. GIVE FIDO AN OUTLET FOR HIS CHASE BEHAVIOR. Teach Fido to chase a ball,
Frisbee, tetherball or squeaky toy rather than your cat. Regular exercise can help your dog remain calm around your cat.

Remember be consistent and make sure every person in the household is doing the same.
By WBBR - February 11, 2010