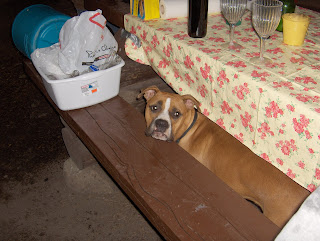 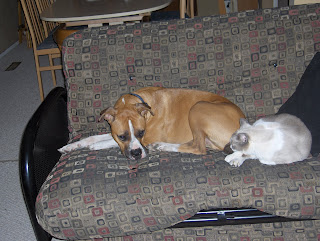 Nice to hear from you! Cody is great! He's such a fantastic addition to our family. I think his absolute favorite person is my 13 year old Jordan, we laugh because they even have similar personalities!! After we got him we went on several weekend camping trips, the first time it was clear this was a very new experience for him but by the end of the summer he was truly a camping dog! He loves to go to the dog parks, which we take him to as often as possible, all the regulars call him the boisterous boxer. I swear he runs full laps 10 times more than all the other dogs combined! We lost our original cat to a coyote in September but have since taken in our daughters cat who was as familiar with dogs as Cody was to cats. Now these two are best buds and often in cahoots with each other. Remember you talking about him going on the couch and beds etc? Well he's adopted the futon couch as his, you can sit on it as long as he's got the back side, he'll share with you but if you sit right back he'll find a way to get you to move. If he can get away with it he sleeps with Jordan, taking up the majority of the bed. Jordan's room is his haven, he can always find something fun to play with in there, whether or not he should play/chew it is another story! Boxers seem different than any other dog I've ever met, their personalities are just so much more human and I've had some pretty human thinking dogs through my life! I cant express how much joy Cody brings to all of our lives. Thank you for fostering him and taking such good care of him. Thank your boys too for letting him get away with getting on the couch!! HA HA. I sent you a couple of pics. Keep in touch!