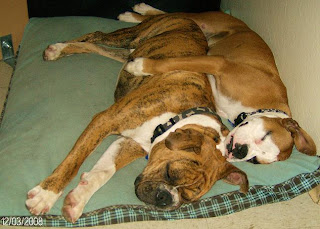 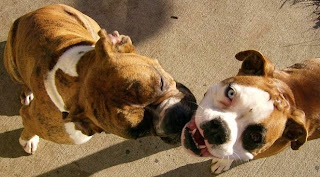 Hi Kerri it's Brenda & Travis the couple who adopted our wonderful Bernie Boy (now spelled Boerne after a sentimental town in Texas) from you back on July 5th. I know, I know it's been forever & a day since last you've heard from us on how he's doing & we appologize immensely! Seems every time I thought about or felt like typing up an email to you something else would come up & distract me. Finally now I decided to just sit my ass down & do it even if it may take a couple days! Figure you've been wondering how life has been for "Mr. Squishy Face"........lol we like smushing up his wrinkles sometimes when playing with him..........too cute! Anyways Boerne is doing great & we love him sooooooo much! Since last you saw him he's put quite a bit of meat & muscle on his bones that maybe you can see in the pics I attached & looks GOOD. We've had no health issues other than the initial bout of Giardia when we first brought him home that we treated with prescribed drugs & the other allergy like symptoms simply went away just as the vet said they should once he settled in & adjusted to the new surroundings. Oh & he had torn a dewclaw while playing so if you notice one of his paws in the pics with vet wrap that's why.

He is such a sweety pie & everyone that meets him goes goo goo over him. We've actually met new friends that also have boxers because of him. Wow is he ever popular when we take him out traveling with us! I recall myself always going crazy whenever I saw a boxer someone else had & now we're the ones with people coming up to us getting all excited about him & sharing stories of boxers they've experienced. My have the tables turned & it's great to be on the receiving end! I've also come to discover that that this breed is by far one of the more adhored & popular ones. I can't recall too many other dog breeds in all my years working in vet clinics or pet stores having such a huge following. Unfortunately you know all to well the detrimental side of that popularity & why a rescue such as LA Boxer Rescue has over 70 needing rehabilitation & new homes. Can't tell you enough how impressed & grateful we are of people like you who put in all the hard work, money, sacrifice & care it takes to rescue these poor four pawed souls that have been selfishly & cruely neglected. Every time we see our Boerne Boy we're ever so grateful!

Boerne has brought so much joy into our lives that we decided to get him a little girl boxer to romp with & add all that much more enjoyment into all three of our lives. Her name is Kisses & we adopted her from Wenatchee Humane Society back on Nov 8th. We drove 3 hours out there so that the three of us could meet one another. Boerne & Kisses hit it off right from the start! There's enclosed play/excercise/introduction pens outside & once we released them in there they had a blast chasing, wrestling & doing the boxer "one-two punch" with one another. Ever since bringing her home not a single day goes by in which they don't enjoy one another's company whether they're playing like mad dogs, snuggled up together napping, going on walks with us or going on car rides to some new adventure. Kisses has brought out so much more energy & life in Boerne it's absolutely awesome! We have definitely learned that two boxers are even better than one! By the way when we decided to start searching for another dog we imediately thought of you & went to your site first before anywhere else but you only had a male boxer available at the time. We are also spreading the word about your rescue in hopes of helping more Boerne's & Kisses find homes!

Well at last I'm finally getting back in touch with you & I appologize again for not doing this so much sooner! "Better late than never"? Hope all is going well with you & all the puppy dogs you have & are rescueing. Thank you also for the pics you had sent us of Boerne when you still had him. Enjoy the one's I've included with this update.

Look forward to hearing back from you whether by email, MySpace or both! We still would love to cross the border to your "neck of the woods" & visit with you. I'm sure you would love to see Boerne in person again & meet his new sidekick Kisses too.
Take care & HAPPY NEW YEAR!
Brenda & Travis
By WBBR - January 03, 2009