Thanks so much. WE love the pictures of Kali. I will put them in the dog folder I keep of all our dogs.

We just got back from a week on the boat. Kali is now an old salty dog. She can go up and down the marina ramps quick as you please. The first ramp took a wheel barrow and three people to get her down. She mostly sleeps when under way. Bumpy waters need some reassurance though.  Her and Blaze are now as one and love each other. Kali has not been alone since she got here. She has 3 grand daughters to play with. She has a love thing with my daughter and gets really excited when she comes over. O the feeling is mutual.

Blaze is in need of some work since he turned 3 he is tending to get aggressive. That will stop soon. I have had one boxer who was aggressive and out of control I will not allow another. We had some issues with him on the trip. He just needs firm rules and someone big enough to enforce them.

If you get the chance you can tell the previous owners, Kali is probably the happiest dog we have ever had. She loves doing new things although some times new is a little scary.
They attract allot of attention where ever we go and are walking adds for boxer rescue.

The hash marks on kalie's trough in the picture are from play fighting with Blaze some times they really go at it and she will only take so much and them explains to Blaze who the boss really is.
Till later and thanks again.. 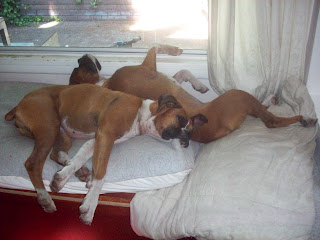